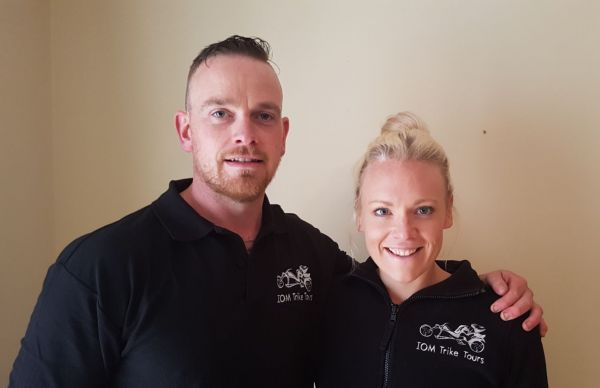 THE OWNERS - DAVE AND KAT

IOM Trike Tours was launched in August 2011 by Andy and Wendy Turner.  It all started with 1 trike, a plethora of passion and plenty of learning curves!  The business has seen continual growth since its launch, resulting in Andy and Wendy deciding to settle into well-earned retirement in September 2017, and local couple, Dave Cubbon and Kat Stamp taking over at the helm.

Dave was born and bred in Onchan, and is a Manxman though and through.  Dave has a good working knowledge of motor vehicles having been employed as a fully qualified mechanic for many years.  He is an avid watcher of the TT and other motor sports on the island.  His passion for things that travel fast on wheels extends to his home life where in the garage (much to Kat's dismay) he currently keeps 1 car, a trials bike, and 2 motorbikes. Kat was born in Bermuda but moved to the Isle of Man at an early age – whilst she knows that she cannot profess to be Manx, the Isle of Man is where her heart is and she hopes that she is now considered a 'local' in St Johns where she and Dave live.  Kat grew up and was schooled on the island but moved away to attend Sheffield Hallam University and study International Tourism Management.  As part of her degree she spent a year living in South Carolina, USA and in 2010 spent a year travelling around the world.  In 2011 she returned to the Isle of Man and worked in numerous hospitality and office based jobs, before ultimately joining the Police and meeting Dave.  Kat left the Isle of Man Constabulary in 2017 and has gone full circle, retuning to the tourism industry to run IOM Trike Tours. Dave also left his role as a Dog Handler in the Constabulary in 2019,

Since taking on IOM Trike Tours, Kat and Dave have added another new trike to the fleet. meaning there are now 4 trikes available! IOM Trike Tours have also moved to a newly refurbished Headquarters on Castlemona Avenue in Douglas. this means they are able to stay close to the hotels and seafront, while offering much better facilities for their wonderful customers!

Although there has been a great deal of uncertainty during the Corona Pandemic, Kat and Dave are looking forward to welcoming locals and visitors alike, and have more improvements planned. Watch this space to see what is to come. 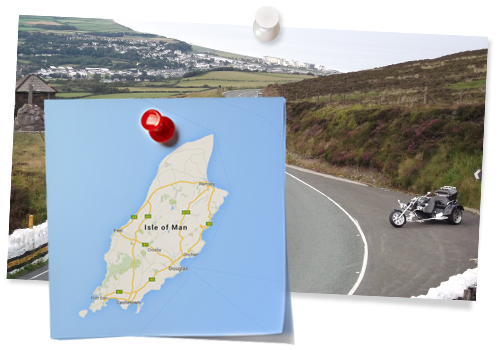 THE ISLE OF MAN EXPERIENCE

IOM Trike Tours now have four Trikes available so you can share this exhilerating experience in safety with your friends and family.

The Isle of Man is known as the Road Racing Capital of the World and as such draws fans of the sport from all over the world.  We know however that some people are nervous about riding motorbikes but have always wished they could just have a go, at least once.  With that in mind we feel we have the best way to fulfil this dream and can now provide a safe, reliable but still thrilling means of transport.  Although many of our roads have no speed limit we want you to enjoy our beautiful Island and tours safely. The emphasis of our tours is on enjoyment rather than high speed, though believe me when we say 30mph feels more like 50mph on the Trike when the stunning countryside is flying past.

The Island has hundreds of miles of quieter roads that will take you through places of historical interest and breathtaking scenery.  Our Manx drivers are very knowledgeable about the Island, its history, people and places, so feel free to ask anything! We love to show people what our Island has to offer and therefore IOM Trike Tours provide a range of set tours for your enjoyment. Alternatively we are happy to discuss tours tailored to your requirements.

We are also available for pre booked Wedding hire, Prom Nights, Birthdays, Anniversaries, Memorial Last Laps and even romantic Marriage Proposals. If you have an idea that we could help you with, please phone to discuss your requirements. 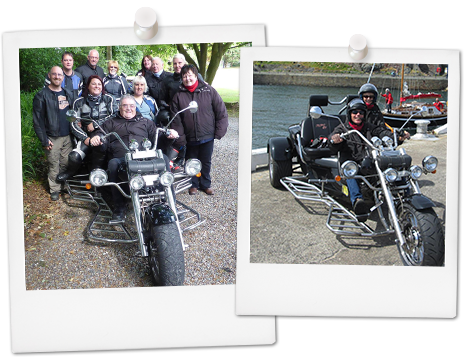 Our Trikes are fully licensed by the Isle of Man Road Transport Licensing Committee and our experienced and knowledgeable Manx drivers will ensure your safety and enjoyment at all times. All our drivers have been Police vetted, and are first aid trained.

The Trikes are factory built in Germany and have been stringently tested and approved for use as Private Hire Vehicles by the Isle of Man Vehicle Testing Centre. For added safety the Trikes are fitted with lap belts for passengers, which must be worn at all times. Each Trike has a 3-way intercom between the driver and passengers and also carry a fire extinguisher and first aid kit.

Your safety and enjoyment are our top priority, so come along and enjoy the ride.